Is Plastic Fiber Optics worth it?

In the following article we detail and delve into the reasons that make Plastic Optical Fiber a unique alternative of the highest reliability of up to 1Gb and with specific and definitive solutions to be prepared in the face of the new era of 4k tv, gaming, and more, which offer no other alternatives.

Wired connection is more stable and powerful than with PLC repeaters

Compared to PLC repeaters, the advantage is very clear as a specific cable transmission system is always much more stable and reliable than the use of the electrical connection used by PLCs, designed for another purpose. The speeds are not optimal, the interferences are high, and the instability is usual, connection always contingent on the quality of the power line and the load of it.

As we said, the PLC repeater offers unpredictable performance by relying on the quality, age and degree of deterioration of the electrical installation. If we have other devices plugged into the mains they will also affect, and a lot, creating interference that deteriorates and can even disable the operation of PLCs.

The first thing we should know is that it is expressly prohibited by the common ICT telecommunications infrastructure regulation in electricity pipelines. So one thing is what you do in your own home but another very different thing is that made by a professional who is self-advised that, obviously, I could not advise or operate against the current legislation.

The main advantage of Plastic Fiber Optics (POF) over ethernet cables is that it is installed by the electrical channels existing in the house, while to wire the house with UTP cables (Cat 5e and Cat 6, for example) it is necessary to open the wall and install visible channels or gutters, or in the worst of the aesthetic cases, "staple" it on the wall.

In case of teleco channeling, the main drawback in the installation of UTP type cables is the thickness and poor malleability of the cable, which makes it difficult or prevents its introduction into existing pipelines. This is where the Optical Fiber of Pástico is very advantageous, thin, malleable and robust. And in case you want to install over electrical ducts, we insist not allowed by law. 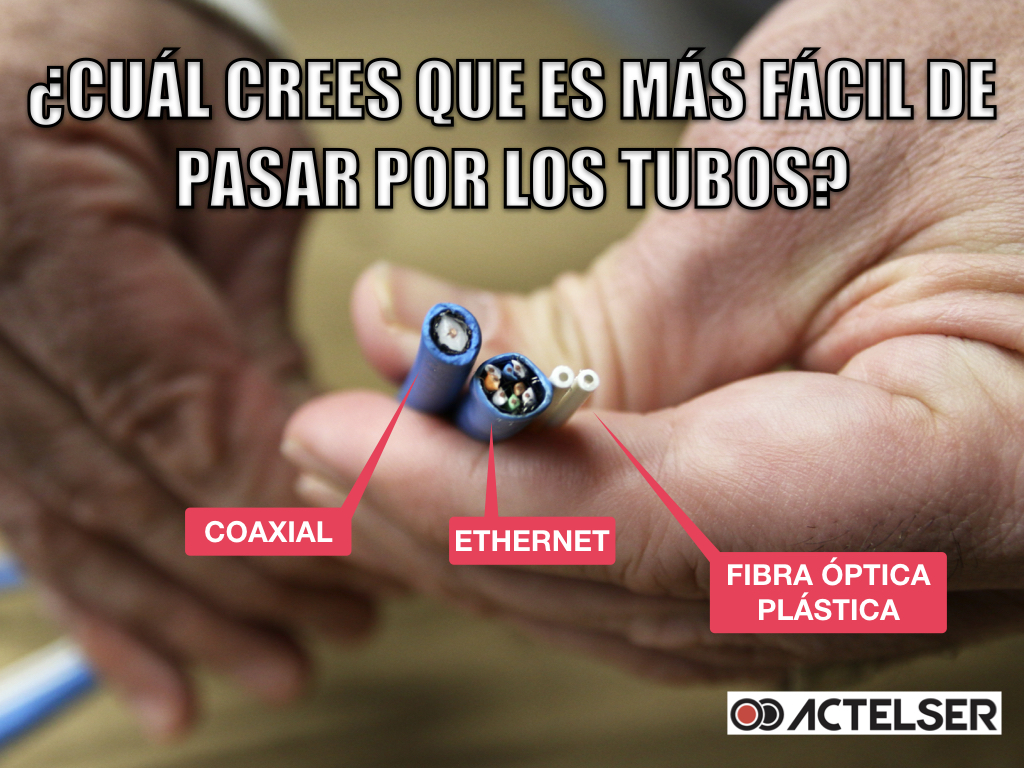 Why can Plastic Fiber Optics be channeled through electrical ducts?

As the POF Plastic Optical Fiber is a light transmitter and is not an electricity conductor and has a reduced thickness, it does not give problems when sharing the same ducts as other electrical cables and, for this reason is authorized by the Ministry of Industry.

The main advantage of Plastic Fiber Optics (POF) over ethernet cables is that it is non-copper, carries light and is allowed to be installed by the existing electrical pipes in the house, while to wire the house with UTP cables (Cat 5e and Cat 6, for example) it is necessary to open the wall to create a new pipeline or put visible gutters, or in the worst case aesthetic, "staple" it by the wall. Those who decide to pass it through the electric pipes, we insist not allowed by law, in addition to the great difficulty of passing the cable by its thickness, being copper carries the inherent risks of creating magnetic fields causing signal couplings that degrades it and causes losses.

Mesh WiFi systems use multiple WiFi terminals connected to each other to cover the home. These points are usually interconnected with each other over WiFi. This gives a problem: What is gained in simplicity when installing is lost in the features. Even through such connections the losses that occur are also important (there is official tests carried out by Telefónica and other operators).

The answer to this problem is an interconnection of access points with Plastic Fiber Optics. In its tests Telefónica concludes that if the network points are interconnected with POF with WIFI connections on the POF terminals, the WiFi speed that the user has available throughout the house is multiplied by 7.

Snap Data by Actelser is a technology developed and manufactured entirely in Spain in 2019 under European standards and guaranteeing the highest speeds.

On Amazon you can find devices of Chinese origin, cheaper and with only one ethernet port but have a transmission speed of 100 Mbps, Actelser Plastic Optical Fiber supports up to 1Gb with three-port RJ45 converters.